Looking for an innovative company with a unique mission, refreshing culture, and great opportunities for career growth? You've found the right place.

Why work for us?

At Renaissance, you'll join a global leader in pre-K–12 education technology. Our 1,000+ dedicated professionals develop and support world-class assessment and practice solutions that are used in over one-third of U.S. schools and more than 90 countries worldwide.

A big part of the day-to-day employee experience is made up of each individual’s engagement in his or her work and the connection we all feel to the company’s mission. Here you are appreciated and rewarded for the expertise and passion you bring to work every day. Also, while most leaders are measured on the basis of business results, we hold our leaders accountable for building a strong and enduring culture, listening to employee feedback, and engaging and retaining talented teams. See what it’s like to be a Renaissance engineer »

Renaissance values the communities where we live and work. That’s why we offer employees two days of paid time off each year to participate in local public service projects and charities. Meet some of our colleagues who volunteer to support events and organizations that are meaningful to them. 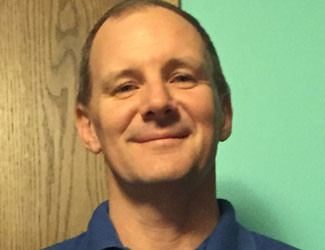 For the past five years, Darin Meyer has been an active volunteer at The Neighborhood Table, a Wisconsin Rapids-based charity that provides hot meals to those in need several times each month. Since 2003, The Neighborhood Table has served more than 250,000 meals to the community. Each meal is sponsored by local organizations and businesses, including Renaissance, which fund the food and provide volunteers.

“I got involved with The Neighborhood Table after meeting its founder, the late Ginny Steen, at another organization’s fundraiser,” he says. “She encouraged me to get involved. It wasn’t long before I was a board member, then a meal coordinator planning the meals and scheduling volunteers.”

Over the years, Darin has brought his children with him to volunteer. “I want them to know that they are fortunate to always know when their next meal is coming. It’s an important lesson. For many guests, the meal at The Neighborhood Table might be the only time that day they were treated with respect and dignity.”

In addition to his activities at The Neighborhood Table, which he’s already committed to in 2019, he’s active on various boards and committees at his church. Also, he coaches his kids’ teams and leads their Cub Scout and Boy Scout troops. 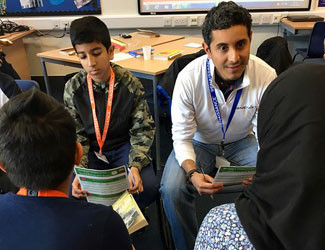 Romeo Ramirez has always been enthusiastic about volunteering. A native of Mexico, Romeo says that coming from a country where much of the population is in need, he’s seen for himself how organised volunteer efforts make a difference. When he learned of the opportunity to help at the Easter Reading Camp, presented by Renaissance, he volunteered right away. “I am firmly convinced that education is key to success as an individual, a community and as a country,” he says, “so I am always willing to contribute and get involved in volunteer activities.”

The camp, hosted at the Raine’s Foundation School, offered students from two schools in London with fun activities based around reading, literature and well-known characters from classical and contemporary books for kids. “I volunteered at the camp for two days,” he says. “I helped set up the library – which was prepared by Renaissance staff and the school librarian – and welcomed the kids when they arrived, making sure they were ready to join in the activities.”

Romeo, who used volunteer time off hours provided by Renaissance for the Reading Camp, says he has been looking for ways to get involve in volunteer activities linked to education. “Having the chance to see how kids enjoy reading for pleasure, made me feel inspired about the Renaissance mission and how our products make a positive impact in people’s lives,” he says. 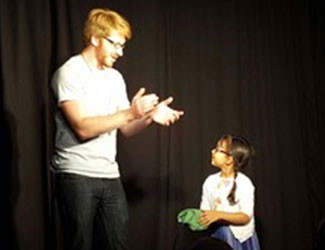 Steve Horton is one of many former educators that work at Renaissance. Like his colleagues, he’s still a teacher at heart. It was from his time in the classroom that he observed important skills that might fly under the radar in a curriculum but that can make a lifelong difference to students.

After graduating from college, Steve joined Teach for America, teaching seventh and eighth grade in the Balzs School District in Phoenix. Later he taught history in the Madison, Wisc., school district. For the past few years, in his free time he has performed with the Atlas Improv Company in Madison. When he became a member of the Atlas leadership team, he was able to participate in community service projects. He wanted his projects to focus on students, many of whom don’t have a support system at home.

“I wanted to find a way to give kids a chance to learn the people skills they’ll need their entire life,” he says. In the spring of 2019, Steve designed the TRUST Workshop — Telling Real Unplanned Stories Together — for middle schoolers in Madison. “Performing improv is good for developing essential skills like collaboration and teamwork.” The afterschool workshops gave students a chance to practice each of these skills in preparation for a final performance, hosted by Steve, for family and friends. The positive response to the first workshops has Steve planning to volunteer his time to lead and direct another group of students later this year.

Learn more about Renaissance on Glassdoor

Glassdoor is one of the world’s largest job and recruiting sites.

Renaissance is an Equal Employment Opportunity and Affirmative Action Employer that is committed to diversity in our hiring practices, as well as in the vendors with whom we transact business, to create an awareness of the importance of diversity.